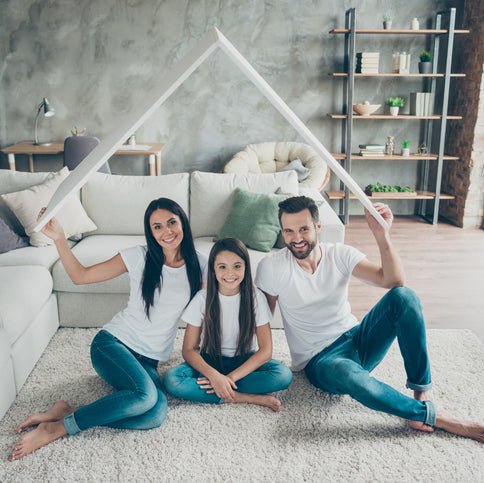 There’s a reason I live in my dad’s girlfriend’s basement: housing isn’t cheap.

That said, home prices in some areas are less affordable than in others. The Ascent studied the average home price by state, and the results are in: The following 10 states have the highest home prices in the country.

A typical home in Hawaii costs $1,038,544. This is — pull out the calculator – almost 2.5 times the cost of an average American house. Holy mackerel. Ocean views and tiny martini umbrellas don’t come cheap.

The District of Columbia takes the money for the highest house prices. A typical home here costs $826,124. Despite the density of the state’s high-earning population, homeowners typically pay more than half of their income to cover their mortgage payments.

A typical home costs $816,804 in California. Expensive. Wondering how many surf lessons this could cover? Probably a lot. Much to the relief of a prospective owner, these aren’t all Los Angeles and San Francisco prices. The typical house in Fresno costs $403,000, according to Zillow.

The Evergreen State is one of the least affordable states for buying a home, with a typical home price of $640,494. Homeowners here often pay 49% of their income to cover their mortgage.

Check out: We ranked this company as the best overall mortgage lender in our Best-of 2022 awards

More: Our picks for the best FHA mortgage lenders

A typical house costs $611,819 in this state. High-demand areas like Harvard’s college town of Cambridge are even more expensive, but there’s an upside: property taxes in Cambridge and Boston are relatively low.

House prices are skyrocketing in this hiker’s and beer-lover’s paradise. Typical cost is $604,911up from $412,819 in 2020. Although residents often earn more than the national median, a typical homeowner pays around 45% of their income to cover their mortgage.

Many homeowners struggle to pay off a mortgage in Oregon. A typical house costs $534,956, and mortgage payments consume 43.3% of the typical homeowner’s income.

Nevada has a median home cost of $484,530. However, the median price for a single-family home in Las Vegas is slightly more affordable at $447,597, as Zillow reports.

To complete the list, New Jersey, where a typical house costs $480,275. It’s not cheap, but it’s only 12% above the national median, which is less than many states on our list. Some Garden State towns offer even better prices: the median price of a home in Newark is just under $415,548.

How to make the most of a tough housing market

If you are an owner in one of the above states: Congratulations! You may have valuable possessions in your hands. If you decide to sell, you will have significant pricing power.

However, buyers are struggling right now. Buying a home is rarely easy, especially in a market that has grown 416% over the past 40 years, far outpacing incomes. Common wisdom recommends that a mortgage cost less than 28% of their total income, but the typical homeowner spends more than 30% of their income on mortgage payments. Yeah-ouch.

If you are determined to buy a home in one of the states with the highest home prices, you may have options. For example, California cities like Visala, Fresno, and Bakersfield offer housing at prices well below the state average. And while a typical home in Denver, Colorado might cost $643,043, a comparable home in Colorado Springs costs $491,000, according to Zillow.

To start figuring out what you can afford, try The Ascent’s nifty mortgage calculator.

Some other tips to help you get started:

Of course, most people don’t have the luxury of renting one of California’s two basements. It is very good. Across the United States, homebuyers have options. As long as your forever home isn’t more than you can afford, you’re in a good place.

The Best Mortgage Lender in Ascent in 2022

Mortgage rates are at their highest level in years and should continue to rise. It’s more important than ever to check your rates with multiple lenders to get the best possible rate while minimizing fees. Even a small difference in your rate could reduce your monthly payment by hundreds.

This is where Better Mortgage comes in.

You can get pre-approved in as little as 3 minutes, without a credit check, and lock in your rate at any time. Another plus? They do not charge origination or lender fees (which can reach 2% of the loan amount for some lenders).