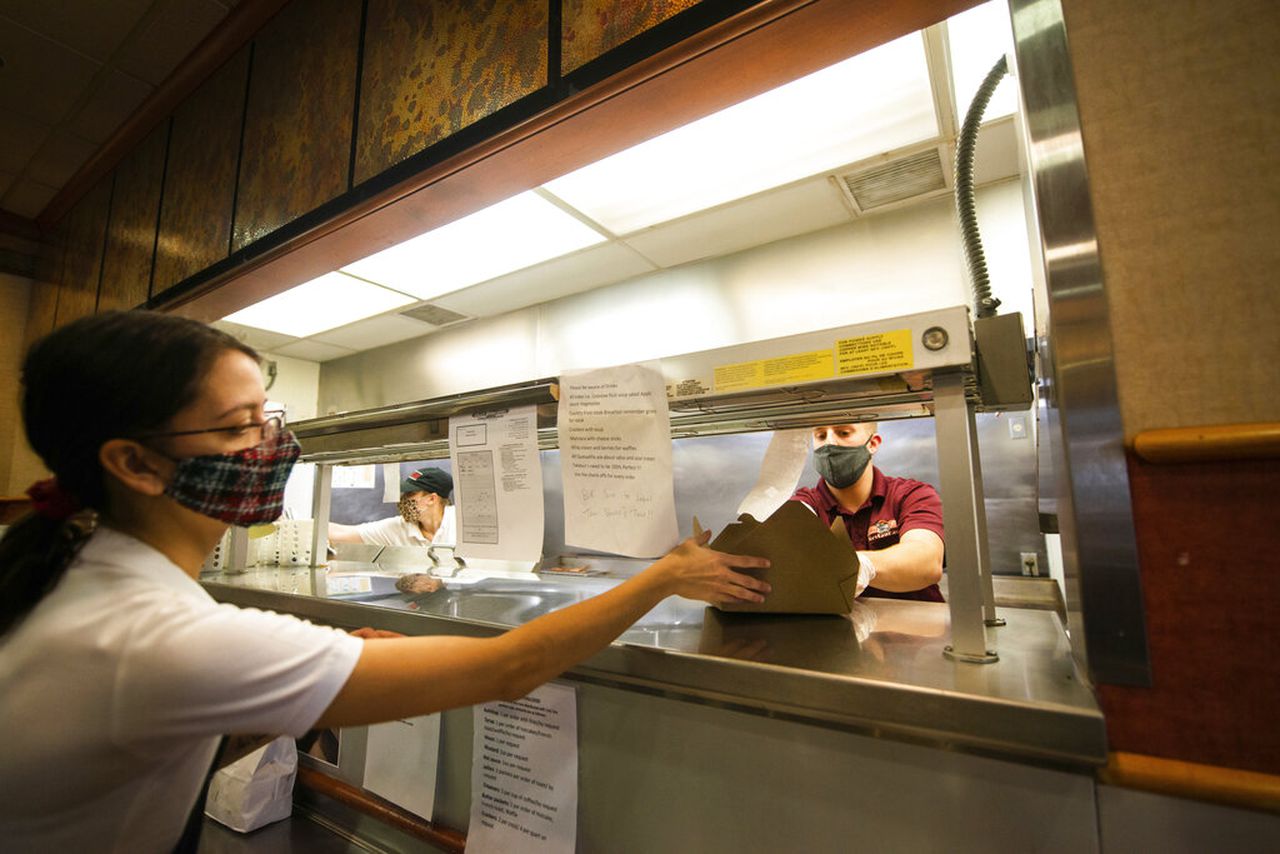 LATROBE, Pa. (AP) – For those who believe in it, ghosts come in a wide variety of forms: floating orbs of light, haunting voices or, as in the opinion of famous fictional ghost hunter Raymond Stantz, “an apparition floating freely on the torso. “.

As it turns out, “ghost kitchens” too: ghosts from the food world that emphasize flavor rather than fear. A ghost kitchen, or virtual restaurant, uses an existing business to create a new menu that is available almost exclusively through delivery, and frequently through third-party delivery services such as DoorDash, GrubHub, Postmates, Seamless, and Uber Eats.

Everything is designed to create a new source of income for businesses without having to create a new storefront and catering space. Restaurants can come up with new menu items – or entire restaurant themes – while saving on the traditional costs of opening a new restaurant, including square footage and servers.

For Joe Wyant, director of training at Valley Dairy Restaurant at Unity, the Taco Joe’s brand was a way of serving different food via a different method.

“We have amazing burgers, so at first we thought, of course, we were going to make burgers,” said Wyant, 50, of Kittanning. “But it was already done through the restaurant. Pizza, wings, they were being made.

He and Melissa Blystone, president of the Valley Dairy Association, looked at their restaurant locations and found that there were few, if any, tacos nearby. They met their food vendors, “we thought about it and met their chef to come up with a bunch of different varieties of tacos,” Wyant said. “I must have gained 15 pounds tasting them.”

After Taco Joe’s first week of operation out of the Rostraver location, Wyant began planning for expansion to Unity and East Huntingdon.

“We try to serve different types of customers than those who typically frequent Valley Dairy,” Blystone said. “From my point of view, it’s a win-win. We use the kitchen space as another way to serve the public.

In March, Governor Tom Wolf temporarily banned indoor dining in Pennsylvania shortly after the coronavirus pandemic arrived. This has forced businesses to embrace home delivery, curbside pickup, and alfresco dining. Limited indoor dining has resumed – as it did after another ban during the holidays, typically one of the busiest times for bars and restaurants.

Pennsylvania was not alone.

All 50 states, along with Washington, DC, have banned or restricted indoor dining to some extent as part of efforts to slow the spread of the virus, according to Open Table.com.

The American restaurant industry is expected to achieve $ 900 billion in sales in 2020, according to the National Restaurant Association. The industry lost about $ 240 billion below that target.

More than 110,000 food establishments in the United States closed – temporarily or permanently – in 2020.

But the industry has grown into a sector during the pandemic.

Online delivery orders, either through third-party services or directly to restaurants, accounted for $ 45 billion last year, up from $ 30 billion in sales in 2017 and ahead of the $ 41 billion forecast pre-covid for 2020 from Alphawise, a data affiliate of Morgan. Stanley Research.

Restaurant sales via delivery and online ordering are up two to three years from initial projections, the researchers found.

The New York Times reported last week that ghost kitchens around the world could turn into a trillion dollar industry within the next decade.

Morgan Stanley predicted that the U.S. restaurant delivery industry would reach $ 220 billion by the end of 2020, and that was long before the pandemic.

No no; Yes Yes

Frank Halling, owner of PghGhostOne in Aliquippa, seemed like a culinary ghost from the start. If you hadn’t bought take-out, you wouldn’t even know his business is there.

“It’s just an empty building that’s a certified kitchen that does take out delivery and take out through our third-party apps,” Halling said. “Basically, the ideal ghost restaurant is no (street) advertisement, no sitting, minimal indoor and outdoor infrastructure.”

Tim Tobitsch, owner of Franktuary in Pittsburgh’s Lawrenceville neighborhood, entered the ghost kitchen business after partnering with NextBite, which markets itself as a “virtual kitchen market”. The Denver-based company has set up Wiz Khalifa’s ghost kitchen, HotBox by Wiz, which operates out of Franktuary, as does the Grilled Cheese Society, another ghost kitchen.

“NextBite had 10 or 13 different concepts,” Tobitsch said. “My chef decided that the grilled cheese would be a good choice to try. This is good because it doesn’t require a lot of grill space, which is paramount when we’re busy.

And while Franktuary can accommodate 90 people normally, Tobitsch said the delivery side of the business was already on the rise before covid-19 made it a practical necessity.

City Works at PPG Place Downtown also found itself moving from a mostly sit-down approach to a greater variety of serving approaches when its management team created the Secret Sauce Ghost Kitchen, with a focus on the barbecue.

“We had known about ghost kitchens for a while, but when we realized we could make them work from our own footprint, it was a really exciting idea,” said Angela Zoiss, Marketing Director for Bottleneck Management at Chicago, the restaurant group that operates the nine City Works locations nationwide.

Secret Sauce began at City Works’ King of Prussia location. Within two weeks, it spread to the restaurant in Gaithersburg, MD. The Pittsburgh branch opened on December 14.

“The advantage is that there are no new overheads,” Zoiss said. “The staff are already there in the building working, and you let your chefs get creative. “

“Initially, it was only available through DoorDash or UberEats,” Rau said. “We have since updated it so that people can order it and pick it up at the curb. “

Halling estimated that 60% of PghGhostOne’s business comes from third-party apps like GrubHub and UberEats.

“I realized it was a bit more difficult than we initially thought,” he said. “Third-party apps aren’t as user-friendly as we thought they were.”

At Franktuary, Tobitsch said each third-party service has its own digital tablet, taking up counter space and posting orders. He decided to use a service called OrderMark to do a little consolidation and keep his kitchen running as smoothly as possible.

“Everything is gathered in a single tablet and prints (meal) tickets. It greatly simplifies things, ”he said.

Halling said that for PghGhostOne, saving a ghost kitchen works as long as the order volume is correct.

“But you also have to be able to keep up with this volume,” he said. “When I’m naturally busy because of Lent and our Lent menu – pierogi, fish sandwiches – I don’t really need the DoorDash and GrubHub stuff at the same time, so you can get smacked all over the place too. . “

“They pay for all the marketing. We pay the food costs, ”he said. “It would be ideal if I had the time to create my own concept and keep 100% of the revenue, but there is something to be said about adding partners with a little more experience. “

Third-party apps, however, can sometimes affect restaurants that don’t even use them. Searching for Pizzeria Delmont Ianni’s on GrubHub reveals what is clearly a menu of Thai cuisine, an issue that forced Ianni’s to post a recent Facebook post clearly stating that they were not affiliated with the list.

When Taco Joe’s opened in late December, Valley Dairy was pleasantly surprised to bring in $ 1,000 the first week.

“We really relied on social media,” Wyant said. “We did things through Facebook and got a lot of questions about ‘where are you located’? “

Blystone said the concept – serving take-out or delivery only in the kitchen of a restaurant that doesn’t appear on that restaurant’s sit-down menu – has sometimes created a bit of confusion.

“You can’t come to Valley Dairy and order a taco,” she said.

Wyant said it ended up working to their advantage.

“You wouldn’t believe all the people in BS were pitching us at the start,” he said. “They wanted to see the health certificate, hitting us just left and right. But it also piqued their curiosity when I answered all of their questions.

Halling said he plans to slice up the PghGhostOne menu to create several ghost concepts.

“My menu is too big,” he said. “And if you have three or four ‘restaurants’ on those third-party apps, that’s more of what will show up when people search the area.”

“We’re really happy to see this, and it shows there is really interest,” Zoiss said. “Right now we have six and we plan to open more as we can reopen restaurants here in Illinois.”

In addition to its use as a source of additional income, Tobitsch said the Ghost Kitchen is a market-driven creation.

“As a foodie myself, this is not necessarily the dining experience that I want. But, at the end of the day, we respond to our customers, and certainly more and more people are choosing to order food this way, ”he said. “I used to have a little bit of animosity towards delivery services only. But since we had all of these restrictions on meals, frankly, I don’t know where we would be without them.

GOP plans to spend federal stimulus may not be allowed