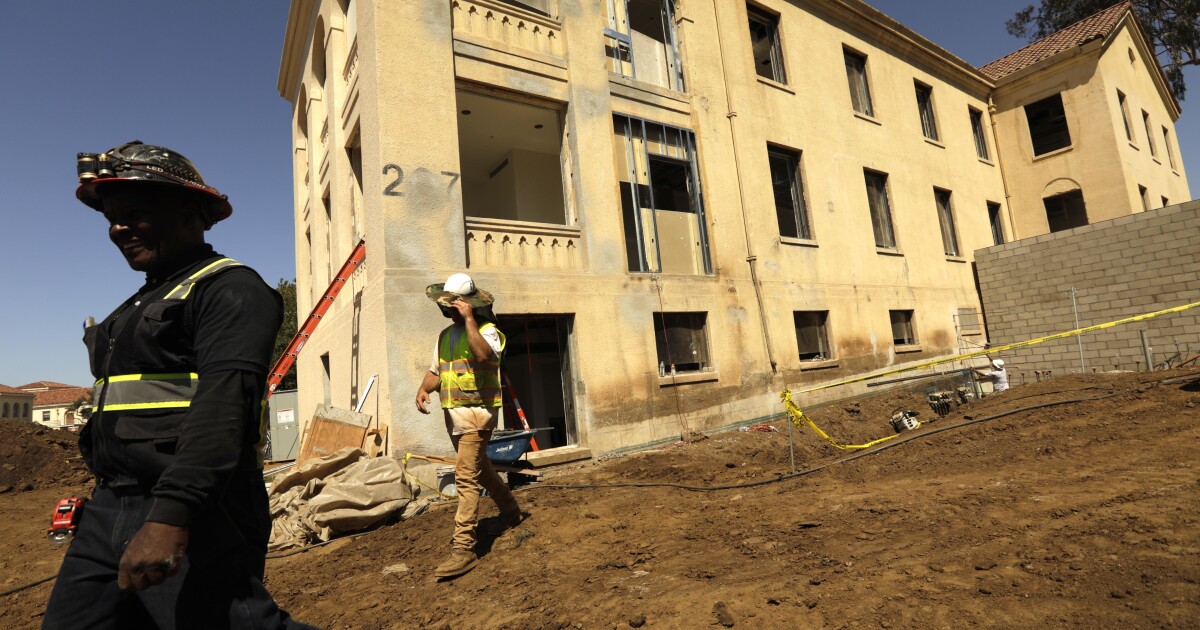 With its donations increasing, a charity formed by the older brother of a firefighter who died in the September 11 terrorist attack on the World Trade Center was poised to up its game.

Its mission to pay the mortgages of families of deceased first responders and build homes for seriously injured veterans was no longer enough, Tunnel to Towers founder Frank Siller decided.

“We need to expand our mission to eradicate homelessness among our veterans nationwide,” Siller told his board of directors late last year.

That goal has brought the New York-based nonprofit to Los Angeles, where it is making a vital contribution to accelerating the extremely slow redevelopment of the Department of Veterans Affairs’ West Los Angeles campus into a community of 3,000 veterans.

An undisclosed grant from Tunnel to Towers will fill a multimillion-dollar gap in construction funding that is expected to continue over the next decade to build at least 1,700 housing units for homeless veterans.

“Their input will speed up the construction of these units by about a year,” said Steve Peck, general manager of US VETS, one of three developers on the team selected by the VA to build the units and oversee services and governance that will make development a community.

The project grew out of the 2015 settlement of a lawsuit alleging the VA misused the 388-acre property by leasing portions of it for non-veteran purposes while failing to serve veterans.

But since its unveiling in a 2016 master plan, there has been little tangible progress. Although a small village of houses was built, allowing the VA and local authorities to relocate homeless veterans who had formed an encampment nearby on San Vicente Boulevard, this was not part of the master plan.

In November, the VA’s inspector general faulted the agency for completing only one building, with 55 homes, out of the 480 planned in the master plan’s four-year target. Once complete, the 28 new and rehabilitated buildings on campus will be operated by developers under long-term leases or, in VA terminology, “enhanced use.”

“Reasons for VA’s limited progress include required environmental impact studies, necessary infrastructure upgrades, the need to establish an enhanced use lease by the lead developer, and difficulties experienced by developers in collecting necessary funds from public and private sources,” the Inspector General said. found.

After initially issuing leases for individual buildings, the VA in 2018 selected the West Los Angeles Veterans Collective to complete the rest of the masterplan which includes 1,694 planned housing units, a city hall, space for service providers and restoration of a Victorian era. Chapel.

Along with US VETS, the collective is made up of Century Housing, a nonprofit that builds and funds affordable housing, and Thomas Saffran and Associates, a Brentwood-based for-profit affordable housing developer.

The first hurdle the team faced was upgrading underground utilities from pre-war housing on campus that were abruptly closed following the 1971 Sylmar earthquake.

“Hundreds of millions of dollars have poured in, much of it is underground,” said Laney Kapgan, VETS US Vice President for Development and Communications. “Opening up the main lines and putting it all in, that’s not what people care about or want to see.”

Once that was done, money remained an obstacle. Most of the $1.1 billion projected cost will come from state and federal housing subsidies, tax credits and bonds. But to apply for those funds, the West Los Angeles Veterans Collective must first line up the difference with private sources.

All three partners are working independently on individual buildings in the plan, meaning each would have had to increase this gap funding for their projects.

Stepped Tunnel to Towers, named to commemorate the fateful journey of Brooklyn firefighter Stephen Siller, who left his vehicle behind and drove through the blocked Brooklyn Tunnel on September 11, 2001 to get to the Twin Towers.

Formed by his older brother in 2001, the nonprofit has seen moderate growth, reporting just over $7 million in donations on its 2015 tax return. In 2019, donations doubled to nearly $40 million and more than doubled in each of the following two years, reaching $258 million last year.

“Our ability to do more good and to diversify comes from the successes we’ve had in showing the American people that Frank Siller is up to it,” said Brad Blakeman, the organization’s senior adviser. “He does not play small ball. It goes big on everything. Our heroes deserve it.

In its new initiative, Tunnel to Towers has found an ally in Los Angeles, US VETS, a national veteran housing and services provider that operates 30 residential sites where veterans receive counseling, career services and management. of cases.

Together they build veterans housing in Florida, Texas, Arizona and at the March Air Reserve Base in Riverside.

The collaboration caught Siller’s eye on VA’s West Los Angeles campus, a real estate gem in the middle of LA’s most expensive neighborhoods with a truncated history as housing of last resort for veterans of wars. Americans. Since its donation to the U.S. government in 1887, the campus has cared for and housed veterans of the Civil War, Spanish–American War, World War I, World War II, Korean War, and Vietnam War.

After the displacement of more than 1,000 inhabitants in 1972, the roar ‘Buildings from the 1920s and the depression were transformed into outpatient clinics, research centers, and a home for veterans with ongoing health care needs after discharge from the VA hospital on the south side of campus.

But several have remained vacant and, over the decades, have fallen into disrepair. Due to their historical value, the master plan calls for 14 buildings to be brought up to current standards but retained in their original form and 14 others to be constructed from scratch.

“When we realized the need in Los Angeles and realized this hallowed ground, Frank Siller and the board said we had to be part of it,” Blakeman said. “We have historic buildings that will be given new life and restoration and we will be able to house many veterans in the LA area.”

The VA Masterplan model comes from another thread of Los Angeles history that is barely remembered outside of the small circle of veterans and housing connoisseurs.

During the construction of the Century Freeway, now Interstate 105, thousands of homes were destroyed in its path. A federal lawsuit challenging the project resulted in a settlement in 1979 establishing the Century Freeway housing program with a charge to create 4,000 replacement homes.

After achieving this goal, the state agency was converted into a nonprofit organization, Century Housing Corp., a social impact lender that has helped fund thousands of affordable housing units in California and one of three collective partners.

Its flagship is Century Villages in Cabrillo, a 27-acre campus in Long Beach where last year more than 1,500 adults — 42% of them veterans — and 400 children occupied permanent, transitional and short-term housing. . Dozens of nonprofit groups, including US VETS, keep staff on site to provide health care, counseling, skills training and case management.

“That’s our model for this project,” said Peck of US VETS. “We will expand this model.”

The Tunnel to Towers donation, which will be spread over several years to ensure access to tax credits and bonds, comes as the progress of the master plan finally materializes. Two other buildings that were commissioned before the collective arrived are expected to open by the end of the year, adding an additional 122 units.

The collective’s first project, a 60-unit apartment building for elderly veterans and their families, is set to open this fall. Early next year, construction will be underway on five more buildings with nearly 400 additional units.

“We are finally bringing home veterans,” said Kapgan of US VETS. “And this is the right time to tell the story.”