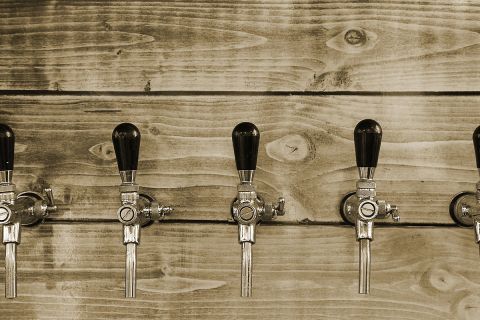 Hotels, resorts and water parks that have a liquor license would have the ability to open swim-up bars for adult guests under bipartisan House legislation directed at Governor Gretchen Whitmer after a vote of 37 to 1 in the State Senate.

Bars, restaurants and other businesses with “on-premises” liquor licenses would also be allowed to install “self-serve dispensers” – such as “tap walls” or “beer walls” – so that customers can pour their own drinks, under a bill approved by the House on Wednesday in a 78-28 vote.

The House also gave final approval on Tuesday to legislation that would allow 17-year-olds to serve alcohol in restaurants, provided they complete a training program and are supervised by someone 18 or older. .

“We’re getting creative and tinkering around the edges, if you will, on ways to help a still-beleaguered industry, especially on the labor side,” said Justin Winslow, president and CEO. the leadership of the Michigan Restaurant & Lodging Association, which lobbied for swim-up bar legislation.

He said Michigan hotels and restaurants are making a comeback, but the industry is employing 35,000 fewer workers than before the pandemic, when there were about 435,000 employees.

“The challenge is that the demand has increased and we don’t quite have the supply to meet it yet,” Winslow said in Bridge Michigan.

The pandemic has really “altered a lot of the thinking about customer service,” said Sen. Jim Runestad, R-White Lake, who sponsored the self-serve liquor bill and said it would help Michigan catch up with dozens of states with similar laws. .

Self-service taps would help customers who are wary of airborne germs or viruses – as well as businesses that have struggled to find workers amid a labor shortage that became “particularly acute,” Runestad told Bridge.

The proposal would allow liquor dispensers in hotel rooms, restaurant booths or elsewhere in a bar. Customers would first need to show ID to purchase a secure key card that they could scan to activate the tap and pour their own beer, wine or mixed drinks.

Self-serve dispensers could dispense up to 16 ounces of beer, 12 ounces of wine, or 12 ounces of a mixed drink per serving. Customers would be limited to 32 ounces in total unless a bartender or employee agrees to let them buy more.

“I’ve been in bars where people completely go out of their minds, pull themselves together enough to say ‘another double,’ and a busy bartender offers them a drink,” Runestad said. “It’s much safer because they would have to come and go through a process in order to get more alcohol.”

Pool bar legislation is backed by companies such as Bavarian Inn Lodge in Frankenmuth, which has four indoor pools and two waterslides, and Boyne Mountain Resort in Boyne Falls, which includes the Avalanche Bay indoor water park. .

“Pool bars have been in operation around the world and in 24 states for many years,” Bavarian Inn’s Michael Zehnder said last month in committee testimony, telling lawmakers that his family was considering expanding its business. company “bigger than ever”. “Neighboring states like Ohio and Wisconsin have had a competitive advantage over Michigan for years.”

Under the legislation, swim-up bars could only be operated by businesses that already held an on-site liquor license, and they could only be located in “a well-defined exclusive area, clearly marked and not accessible to minors”.

The bars themselves should be made of a material that is “non-absorbent” and does not contain any sharp edges. The pool would need a lifeguard service and could not contain a slide or diving board.

The water should be treated with “enhanced disinfection and filtration standards” and monitored with an electronic chemical control system. And plates and cups should be made of plastic or another shatterproof material designed to “reduce the risk of spilling food or drink” into the water.