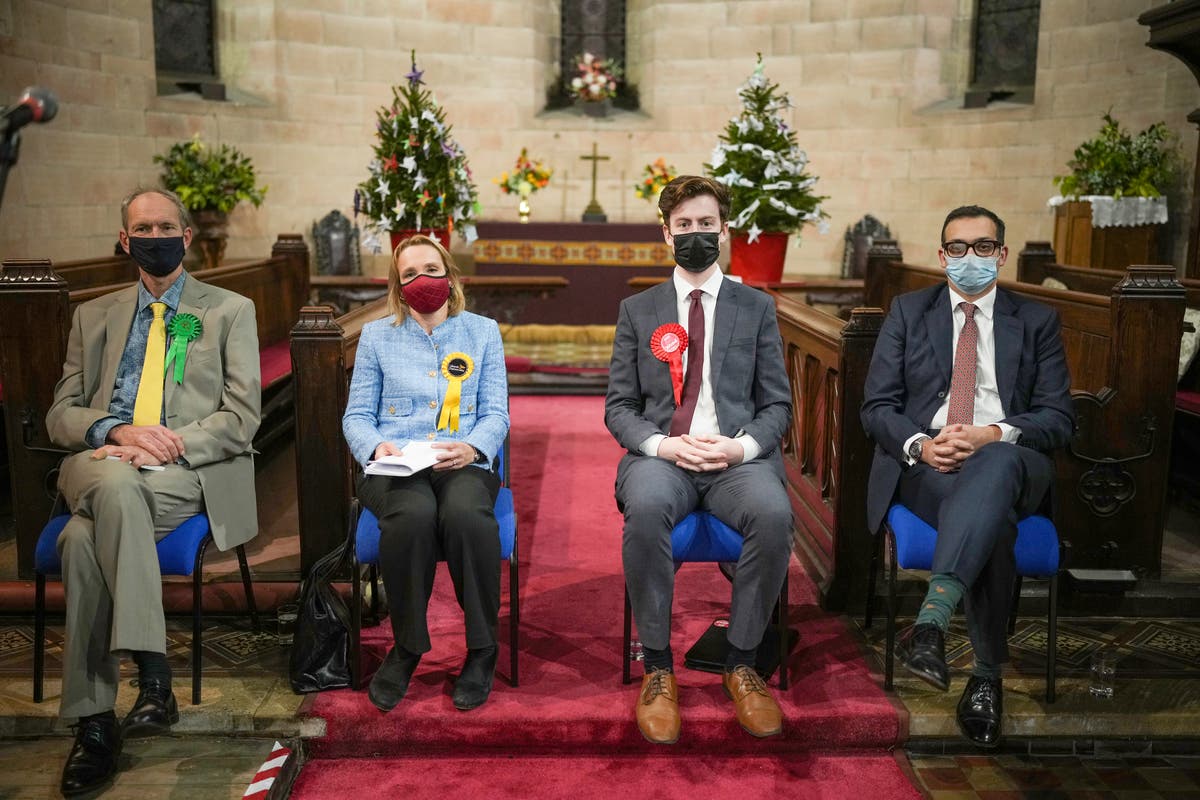 Votes in the North Shropshire by-election tonight are counted in the contest for successor to Tory MP Owen Paterson, who resigned after breaking lobbying rules.

Polling stations closed at 10 p.m. in the West Midlands constituency which is a safe seat for the Tories.

The result is expected to be announced in the early hours of Friday morning.

Mr Paterson represented the constituency for 24 years until his resignation after Prime Minister Boris Johnson’s failed attempt to protect him from a 30-day suspension.

Mr Johnson had tried to get his party to lead a review of standardization rules for MPs after Mr Paterson was found guilty of breaking lobbying rules for two companies paying him £ 100,000 a year.

After public scrutiny, Mr. Paterson resigned and said he wanted to escape the “cruel world of politics”.

The by-election also comes after the prime minister’s authority was called into question after nearly 100 Tory rebels voted against coronavirus restrictions in his newly adopted ‘plan B’.

When asked on Wednesday whether Mr Johnson would resign if his party lost North Shropshire, the Prime Minister’s press secretary said: “We fight for every vote.”

Less than an hour ago, the polling stations were closed in the North Shropshire by-election and the counting of the votes began.

The result should be announced in the early hours of tomorrow (Friday) morning.

In pictures: Votes are cast in the North Shropshire by-election

Some Brexit news now. DUP chief Sir Jeffrey Donaldson said he would warn European Commission Vice-President Maros Sefcovic that it was time to make a decision on the Northern Ireland Protocol.

The couple are due to meet later Thursday.

In a statement ahead of the meeting, Sir Jeffrey said he would make it clear that his party’s continued participation in the Stormont Assembly is “not sustainable in the absence of action to remove the border from the sea of ‘Ireland”.

“I have shown respect and goodwill in giving space for the current talks to succeed, but unfortunately this has not been reciprocated,” he said ahead of the talks.

Sir Jeffrey continued with a warning: “If the European Union wants to protect political institutions in Northern Ireland, then they must seize this opportunity. Failure to do so will lead to the inevitable consequences that I described on September 9.

“Now is the decision time for the EU. The time to speak is now over. Things must now be brought to a critical point.

Government refuses to rule out 3.8% increase in rail fares

Transport Secretary Grant Shapps refused to raise rail fares by 3.1% when he was challenged by Labor in the Commons.

Shadow Transport Secretary Louise Haigh said such an increase would be “brutal”.

The Labor MP said: “Before a tough Christmas, people across the country are paying the price for conservative inflation.”

Shapps replied: “She’s right about inflation of course, but it’s a global post-pandemic problem, rather than specific to this country, and that’s why the Chancellor of the Exchequer announced a series of measures. , including a sharp increase in the living wage of 6.6%, even outperforming inflation. ”

Conservative MPs attacked Chris Whitty’s call for people to cut back on Christmas holidays as a councilor “running the show” – despite no vote in the House of Commons to impose restrictions.

Former ministers Steve Brine and Steve Baker called out to the chief medical officer of health after urging the public not to mingle at festive events unless they “really matter to them.”

Our Deputy Political Editor Rob merrick to the story:

The Queen has canceled her traditional family lunch before Christmas next week.

It is understood the move was a precaution amid the rapid spread of the new variant of Covid-19.

ITV royal correspondent Chris Ship has suggested it could endanger too many people’s Christmas preparations if it happens.

My colleague Kate ng has more details below:

In a clip intended for broadcasters to be published later, Boris Johnson denied that he introduced the lockdown by stealth.

He said: “What we have is the added protection of vaccines and the ability to test.

“But we’re not saying we want to undo things, we’re not locking things out, and the quickest path to normalcy is to be boosted.”

The Conservative North Shropshire by-election candidate has admitted that reports of anti-lockdown parties in Westminster came to the door as he called for votes.

Although people are primarily concerned with local issues, they have reacted with a mixture of ‘opposites and anger’ to allegations that Tory staff have come together during the Covid shutdowns, said Neil Shastri-Hurst The temperature yesterday.

Lesley Fisher, a retired teacher who lives in Oswestry, said Boris Johnson had “lost the trust of the people”, according to the newspaper.

Meanwhile, in Whitchurch, Brian Ashley, 70, a van driver, said the Prime Minister was “a smart man” and his advisers “defeated” him.

Labor is asking for an apology after a Tory MP said Chief Medical Officer Chris Whitty should ‘rely’ on Boris Johnson for advice on Covid precautions over the Christmas season.

Joy Morrissey, who is a parliamentary assistant at the Justice Department, denounced after Professor Whitty said people should “deprioritize” unnecessary social gatherings, at a time when the PM insists he doesn’t not order the cancellation of the Christmas holidays.

Boris Johnson faces new charges of lying in parliament after falsely denying the Foreign Office plans to cut staff by 10%.

Senior Conservative MP Tom Tugendhat protested the move in the House of Commons – warning that it undermined aspirations for a “global Britain” – but the PM insisted he was wrong.

“The information that has come to his ears recently is fake news,” Mr Johnson told the Foreign Affairs Committee chairman after Foreign Secretary Liz Truss whispered something to him.

Loans without credit check to unemployed people. Online improvements that pay off