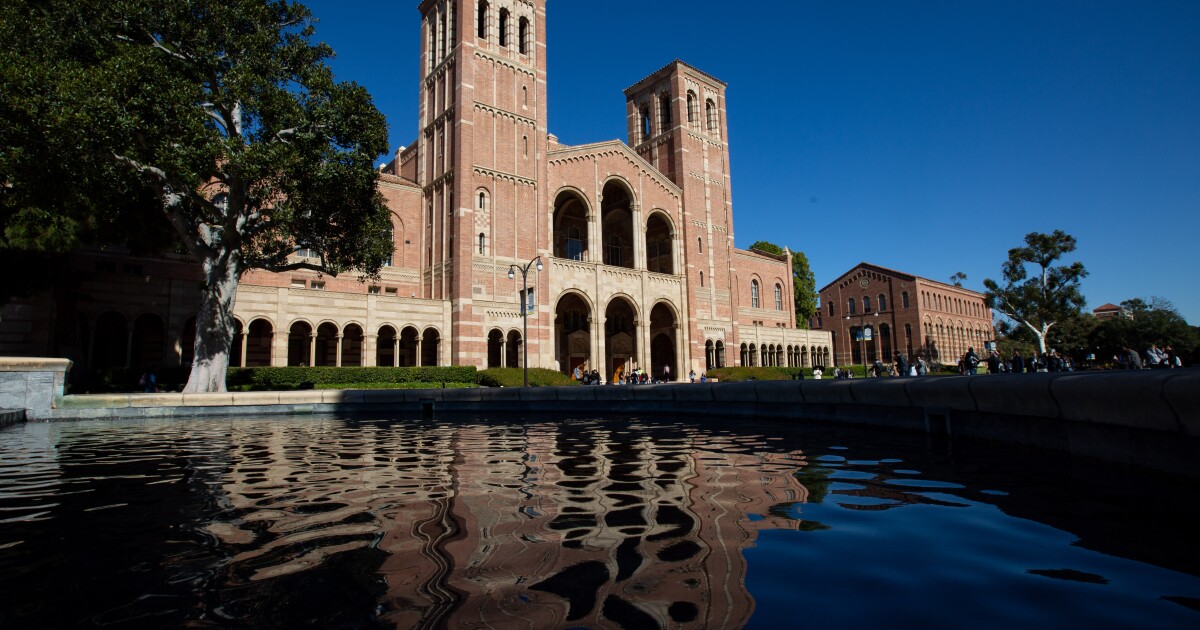 According to a statewide poll released Monday.

More than three-quarters of state residents surveyed still consider four-year degrees valuable. But they are split on whether higher education is still as useful today for securing better economic opportunities as it was in the past, with 53% saying so and 45% expressing doubts. And 63% of respondents said multiple pathways, including college and apprenticeship, can help lead successful and profitable careers, compared to 33% who said four-year degrees were necessary.

The findings underscore a significant perception gap between the California public and political and educational leaders who tout the state’s generous financial aid programs and the long-term economic benefits of a four-year degree.

The UC 10-campus system, for example, fully covers tuition for 55% of its California undergraduates using state Cal grants and its own institutional aid generated from tuition revenue, philanthropy and other sources. Its greater financial aid resources mean that UC campuses can be less expensive than community colleges when housing, food and other non-tuition costs are taken into account, according to a analysis by the Institute for university access and success.

State launches one of its biggest-ever efforts to make college affordable, disbursing $1 billion in expanded Cal Grants, middle-class scholarships, and student housing and textbooks more affordable. UC is offering more financial aid programs that cover full tuition with no loans, committing to providing a debt-free education to all undergraduate students by 2030 and half of them from 2025.

But this information does not seem to be widely known.

Michael Lawson, president of the Los Angeles Urban League, one of three community organizations that commissioned the survey, said awareness of California’s financial aid programs and the push for college affordability was “close to zero” in much of the black community. He added that lowering the costs of higher education may still not make it affordable. Additionally, he said, some black adults feel an urgent need to work to help support their families, which could help lower college attendance rates.

Of Californians surveyed, 60% think UC is largely or completely unaffordable — a perception shared across racial groups, political ideologies, age, gender, income levels and geographic regions. Cal State is also considered largely or completely unaffordable by 55% of respondents. The estimated cost of attending UC for 2022-2023, including tuition, housing, food, and other expenses, is $38,504 for California residents who live on campus; Cal State’s is $30,676.

State residents are split on how to deal with rising costs for the UC and Cal State systems, with 18% supporting higher tuition, 24% more taxpayer support, 28% supporting a mix two and 30% unsure or refusing to answer.

“Respondents are clearly worried about the sticker shock when it comes to the costs of higher education, but the data tells us that a degree or diploma is still an essential means of economic and social mobility for students and California in general,” said Jake Brymner, deputy director of policy and public affairs for the California Student Aid Commission.

“Despite California’s generous state financial aid system, its complexity means that students and their families don’t get a clear message about how these resources are available to them.”

In a statement, UC said it understands the myriad economic challenges, exacerbated by the COVID-19 pandemic, facing California students and their families regarding tuition fees and student debt.

“However, it is important to emphasize that a UC degree continues to be one of the most valuable investments available to Californians,” the statement said. “Our campuses have graduated more than 40,000 California students annually over the past decade, the majority of whom continue to work in California and double your earnings during the first decade of their career.

Michèle Siqueiros, President of the Campaign for College Opportunity, called for a statewide public awareness campaign about the availability of financial aid and the “reality that the University of California and the State of Cal are absolutely the best deals in the national higher education. But there is no help if you don’t know it.

Scott Kerchner, a former Marine Corps colonel who works as an air ambulance helicopter pilot in the San Diego area and was one of the Californians interviewed by the survey, said he wondered if the university was worth the price for everyone.

Kerchner said he believes in the value of higher education — he has a bachelor’s degree in political science and two master’s degrees, and both of his sons are college-educated. One attended San Diego State University, and although most of his fees were covered by a state program for military families, Kerchner said a four-year degree years costs more than $100,000.

“The average person doesn’t have that kind of money lying around,” he said. “Cal State and UC have gotten so expensive, and unless you get a degree in medicine, law, or engineering, I’m not sure you’ll get the most out of it.”

Kerchner added that schools should restore more vocational education. A friend of his, he said, doesn’t have a college degree but opened a high-end hardware store and makes more than $500,000 a year. A neighbor is a successful electrician and a cousin is a plumber who owns a boat and several houses. “There may be more value in community colleges or trades,” he said.

Latino respondents were the racial or ethnic group most likely to consider UC and Cal State unaffordable — about two-thirds — even though 73% of them said a four-year college degree was precious. They were more likely to believe that higher education would not provide the same beneficial economic opportunities today as in the past. More than half said they faced barriers getting into college, including 62% women and 44% men – a gender gap larger than that seen among white, black and Asian Pacific American respondents . And 66% of Latinos were dissatisfied with the state’s economy, compared to 61% for other demographic groups.

Helen Torres, Executive Director of Hispanas organized for political equality, who also co-commissioned the poll, said the results underscore the economic insecurity many Latinos face, especially women. Latinas in California have been hit hard by the pandemic, with 28.9% losing their jobs through May 2020, compared to 9.4% of white women. Latinas earned just 43 cents for every dollar earned by white men in 2015, according to the organization’s 2020 report.

Latinos “feel a lack of opportunity and accessibility to economic and educational opportunities,” Torres said. “Ultimately, our state public institutions have the opportunity to better serve the state’s largest and growing population, whether through certification programs or four-year degrees. We need to make college more affordable and more accessible.

The California Community Poll was commissioned by community groups in consultation with The Times and conducted by Strategies 360, a polling and research company. Over 1,200 adults from an online survey panel were interviewed in English and Spanish between April 7 and April 18. The poll’s credibility interval, the equivalent of the margin of error for panel-based polls, was 2.8 percentage points in either direction.

The poll also found that satisfaction with K-12 schools fell to 48% of those surveyed, down from 57% in a similar poll conducted in February 2020. More than two-thirds believe the pandemic has had an impact somewhat or very detrimental to students’ mental health and well-being — but the same proportion believe that they will recover almost completely or completely.

Black women, on the other hand, are much more worried: 40% think that their children will definitely be left behind.

Lawson of the Urban League said such educational concerns existed long before the pandemic. “It’s an exacerbation of the problems we’ve had in the past that we haven’t addressed, either through dollars or programs, other than sport,” he said.

Asian-Pacific Americans were the most likely to believe their children would recover from the pandemic. They also believed very strongly that a four-year degree was necessary for economic opportunity and that UC and California State were affordable.

But Nancy Yap, executive director of the Center for Asians United for Empowerment, the poll’s third community partner, said the data does not reflect the large economic disparities between the various ethnic groups that make up the community. A common area of ​​concern was racial violence and hate crimes, cited as a concern by 72% of Asian-Pacific Americans — the highest level among all demographic groups.

Overall, the poll found that dissatisfaction with the economy, K-12 education, crime and public safety has increased since the last poll in February 2020. .

The poll also revealed glimmers of optimism: Majorities of Latino, Black and Pacific Asian Americans believed that people like them would become more mainstream and accepted in America. White respondents were about evenly split on this question.

And most Californians of all racial and ethnic groups said college campuses were welcoming to people like them. Political ideology made a bigger difference, with 74% of liberals feeling welcome, compared to 64% of moderates and 57% of conservatives.