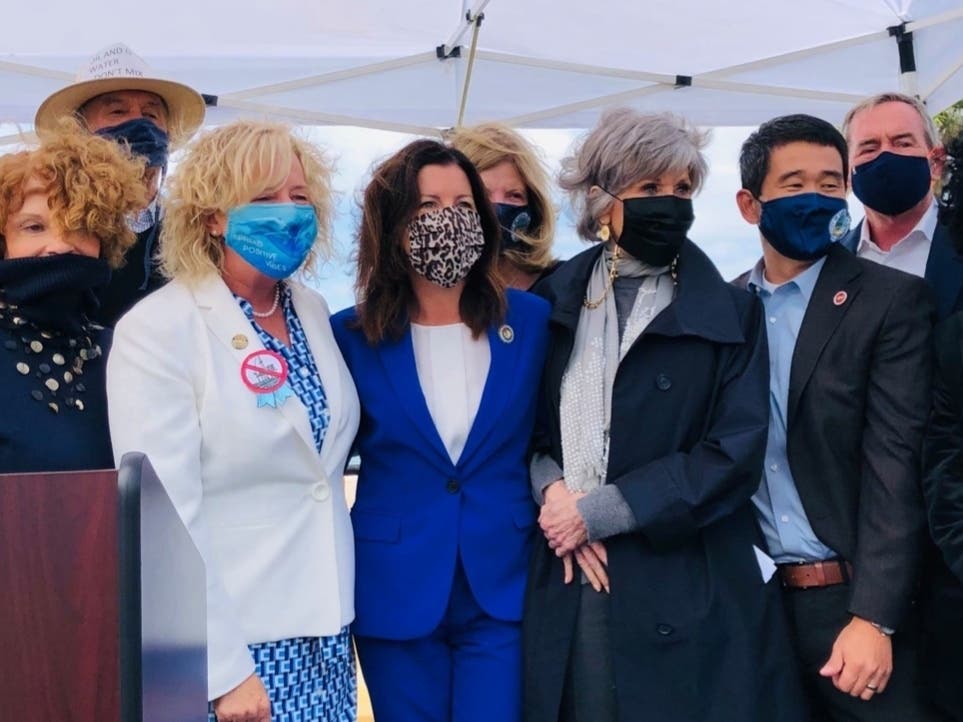 LAKE FOREST, CA – On a day when six seabirds were released at the end of Huntington Beach Pier, Orange County lawmakers gathered to consider the dangers of offshore drilling and must stop the process for the good of those on land and in the sea.

Rep. Katie Porter focused on what she called “subsidies” to oil companies that spill into the ocean off the southern coast of California. About 250,000 pounds of “oily debris” were collected from local beaches along with 14 barrels of tar balls from the leak that was first reported on October 2.

“It’s a small fraction of the oil that was released, most of which was released into the ocean and made its way up the food chain and to the bottom of the ocean,” she said. “… We will not learn of the long term consequences for many years to come.”

Porter vowed to conduct a “full and fair investigation into the circumstances of this leak,” but she wanted to ensure that all regulatory and law enforcement agencies complete their investigations before “talking about liability.” .

This week, five rehabilitated brown pelicans and a Brandt’s Cormorant were released into the wild after the Orange County oil spill, according to the Wetlands and Wildlife Care Center. The birds were not oiled but were affected by the oil spill that wreaked havoc on the Orange County coast this month, according to executive director Debbie McGuire.

â€œThese birds have been ready to go since Oct. 4,â€ McGuire said. â€œThey were waiting for the ‘everything is clear’â€ from the incident command post, that the birds could be released in a clean and safe environment.

After oil pollutes the ocean and beaches in Orange County this month, the wildlife care center is finally able to return its patients to the wild.

â€œEven though they weren’t oiled, they became indirect victims of the spill,â€ McGuire said. “These seabirds need and deserve a clean environment, and now it is possible.”

Yet with authorities now examining the influx of freighters to the region as the main cause of the spill, bans on offshore oil drilling have increased.

With Porter, spoke Rep. Alan Lowenthal, D-Long Beach, who said it was a “welcome relief” to know that the spill, which was originally estimated at 144,000 gallons, will likely be closer to 25,000 gallons. .

â€œBut that’s little solace for the store owners, vendors, fishermen and other small businesses whose lives were turned upside down in moments and who are still recovering today,â€ Lowenthal said.

Lowenthal echoed Porter’s comment that the cause of the leak will be fully investigated.

“We will get to the bottom of the leak and hold the parties accountable, including (the owner of the Huntington Beach oil rig and pipeline) Amplify Energy, accountable for their actions,” Lowenthal said.

â€œPreventing further offshore drilling is a critical first step and we are actively working to ensure that it stays in the Build Back Better Act which makes its way to Congress,â€ Lowenthal said. “But we also need to work to reduce current production and demand that companies decommission their old rigs, wells and pipelines and clean up the mess they leave behind.”

â€œBut the common thread is drilling, because (when) they drill, they overflow,â€ Levin said. “It cannot be done without significant risk.”

Levin also said the amount of oil extracted offshore is a â€œdrop in the ocean,â€ and that the annual amount totals about a third of a day extracted by the industry as a whole.

“The risks just aren’t worth it,” he said. “And I challenge anyone in the oil industry to explain how the economic and environmental risks of the southern California coast are worth it.”

Rep. Sara Jacobs, D-San Diego, said protecting the environment and wildlife “are two of the top concerns I hear from my constituents,” and added, “We need to focus on decommissioning (existing oil platforms) as soon as possible “.

The field hearing aimed to assess the impact of the spill on the region, and Breneman offered a moving account of how the oil spill affected his fishing business, which dates back four generations.

Breneman recalled how he was fishing on October 1 and he “detected a distinct smell of oil” in Newport harbor.

At first he thought it was from a spill on his own boat, he said, and he checked the hoses and anywhere else on the boat that might have malfunctioned. Once the oil spill was confirmed, its sales of fish fell drastically, down 90%. He added that his customers are “scared, worried that the” product “is contaminated.”

He recalled how his father “struggled” under similar circumstances following another oil spill in the 1990s.

He added that due to the port closures his boat was “trapped” in Newport harbor, so “I wasn’t even able to manage my accounts. And to tell you the truth, it has been a very difficult couple of weeks. â€¦ I don’t know how the public is going to react in the long term. “

Breneman pointed out that he was fishing 90 miles offshore and 3,000 feet deep in “pristine waters” so his booty was not contaminated.

Desai pointed out how the oil spill shut down the Pacific Air Show in Huntington Beach, which had its own economic impacts. He said Wahoo’s Fish Taco owner Wing Lam told him that on the Saturday before the oil spill, business on the pier was like a “busy summer day,” but after the leak, “it was like a ghost town “.

Bobby Abdel, the owner of Jack’s Surfboards, maintains a large inventory of unused surfboards on the shelves, Desai said.

â€œI could go on and on with the stories,â€ Desai said. â€œThe message is clear. Where they drill, they overthrow and when they overthrow, working class people grapple with the consequences.â€¦ A clean, healthy ocean is the lifeblood of our local economy.â€

When Porter asked Desai if Small Business Administration loans would help, he said yes, but added that business owners “don’t want any help or a helping hand or anything, but in circumstances like this, any help is welcome. “

Porter said the Amplify Energy subsidiary that operates the leaked Huntington Beach pipeline has received “nearly $ 20 million from the federal government, particularly because the oil wells they operate are at the end of their life. and don’t produce a lot of oil, which makes them less profitable. “

She suggested the money would be better spent helping local businesses.

She said the company would get an additional $ 11 million for new oil wells. The Build Back Better Act would curtail these types of programs, Porter said.

Desai approved the resolution proposed by Huntington Beach City Council calling for an end to offshore drilling and encouraged other local towns to do the same.

Lowenthal noted that Amplify Energy also received $ 5.5 million in pandemic relief in the form of a paycheck protection program loan that was canceled.

Ziccardi testified that a dolphin struck by oil had to be euthanized. He said dolphins are particularly vulnerable to oil leaks because they can ingest it, which affects their immune, reproductive and gastrointestinal systems.

Ziccardi said his team collected seven Snow Plover birds which are a federally threatened species that has recently been reinstated in a growing population. All the birds survived, including four in the wild and three are expected to be released by Wednesday, he said.

The birds have been banded so that authorities can track them in the future, Ziccardi said.

Ziccardi said the key to saving wildlife lies in programs such as his network, which can immediately provide 24-hour response teams. First aid and triage of animals is key to saving them, he said. -he declares.

Meanwhile, actress Jane Fonda brought her star power to Laguna Beach on Monday to join a group of local lawmakers who have called for an end to offshore oil drilling. A protester with a megaphone heckled Fonda, who joked: “It’s not like I’m not used to this.”

Fonda asked the activists to breathe deeply, then pointed out that “well over half of the oxygen you just breathed comes to us because of this”, pointing to the ocean.

Fonda argued that existing oil rigs in California are “not safe and need to be shut down and decommissioned,” but added, “It’s not enough,” and the company needs to move quickly to initiatives of cleaner energy.

â€œClimate scientists call this code red an existential crisis,â€ Fonda said. “It is important that we understand this.”

Senator Dave Min, D-Irvine, said he would introduce legislation to ban offshore oil drilling, and Orange County supervisor Katrina Foley said she was working on a clean energy plan to the count.

â€œThe time to act is now and we know there is only one way to stop more oil spills and that is to end all offshore drilling,â€ Min said. .

MP Cottie Petrie-Norris, of D-Laguna Beach, also said she was in favor of a ban on offshore drilling.

It is still possible to donate to the Wetlands & Wildlife Care Center, which always looks after oiled animals, through their web page www.wwcoc.org.

Tesla’s discount auto insurance is coming to another state – should you participate?