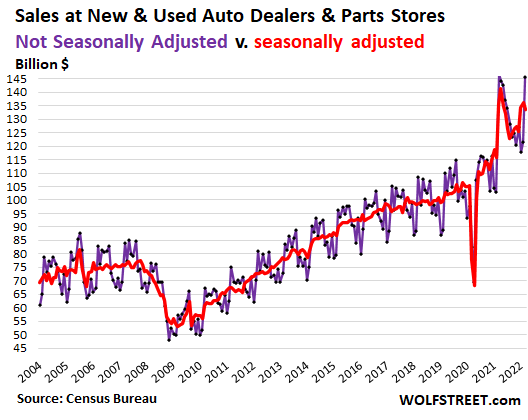 It’s tough out there in multiple ways.

Retail sales, released today by the Commerce Department, are just sales of goods, not services. But services account for nearly two-thirds of what consumers spend and include rent, plane tickets, hotel reservations, streaming services, insurance, concert tickets, and more. There has been an increase in consumer spending on services in recent months as consumers revert to pre-pandemic spending patterns and shift their spending towards services, which had collapsed. Spending on services was up 12.4% from a year earlier in February, easily outpacing inflation. So this shift from goods to services – that is, from retail – has happened.

Stimulus Miracle March 2021 has been a very tough month to beat. But the Americans missed it. What they haven’t done is blow off the inflation that is now raging.

Durable goods inflation cooled somewhat in March, due to a sharp decline in used vehicle prices after huge spikes, and the CPI for durable goods fell 0.9% in March compared to February. But it was still up 17.4% year-over-year (red in the chart below). Non-durable goods prices rose 3.8% in March from February and 13.1% year-on-year (purple).

Sales at dealerships of new and used vehicles and parts, the largest category of retailers, fell 1.9% in March compared to February seasonally adjusted (red line), on the stagnation of the prices of new vehicles and the fall in the prices of used vehicles. But not seasonally adjustedsales jumped to $145 billion, nearly matching the all-time high of March 2021, which had been the last month before auto dealers began to run out of inventory (purple line).

E-commerce sales and other “non-store retailers” the second-largest category, fell 6.4% seasonally adjusted in March from February, the second straight month of declines, to $90 billion, and rose just 1.8% from year over year versus Stimulus Miracle March:

Food and Beverage Stores: Sales rose 1.0% for the month, seasonally adjusted, to $79 billion, and jumped 8.4% year-over-year, fueled by price increases:

Food services and drinking places: Sales jumped 1.0% for the seasonally adjusted month to a record $75 billion, and 19.4% year-over-year. It’s over two and a half times CPI inflation rate for out-of-home food (6.9%):

General Merchandise Stores: Sales rose 6.6% for the month to a record $62 billion, seasonally adjusted, and were up 4.8% from March 2021’s Stimulus Miracle. Walmart and Costco are in that category, but not the department stores.

service stations, oh my, no surprises here: sales rose 8.9% for the month to a record $64 billion, seasonally adjusted, and 37% year-over-year, entirely due to soaring gasoline prices.

Stores of building materials, supplies and garden equipment: Sales rose 0.5% for the month to a record $43.6 billion, posting a year-over-year gain of 0.6% from Stimulus Miracle March:

Clothing and accessories stores: Sales jumped 2.6% for the month and 7.3% year over year to $27 billion, seasonally adjusted:

Department stores: sales fell 0.3% for the month to $12 billion, but rose 7.4% from Stimulus Miracle March. Compared to the peak in 2000, sales have fallen 39% as Americans have abandoned this type of retailer, causing the closure of thousands of stores and numerous bankruptcies:

Furniture and home furnishings stores: Sales increased 0.7% for the month (seasonally adjusted) and 3.6% year over year to $13 billion:

Sporting goods, hobby, book and music stores: Sales jumped 3.3% for the month to $9.4 billion (seasonally adjusted), but were down 5.1% from Stimulus Miracle March:

Electronics and appliance stores: Sales rose 3.3% for the month to $7.5 billion, seasonally adjusted, but were down 9.7% from Stimulus Miracle March. This category covers specialty stores, such as Best Buy. Sales of consumer electronics and appliances are huge, but they’re spread across many types of stores, such as General Merchandise (above). And a big part of it went to e-commerce.

Opinion: This new law would make it more expensive — and dangerous — to drive in California

How to Buy a House in a Hot Real Estate Market