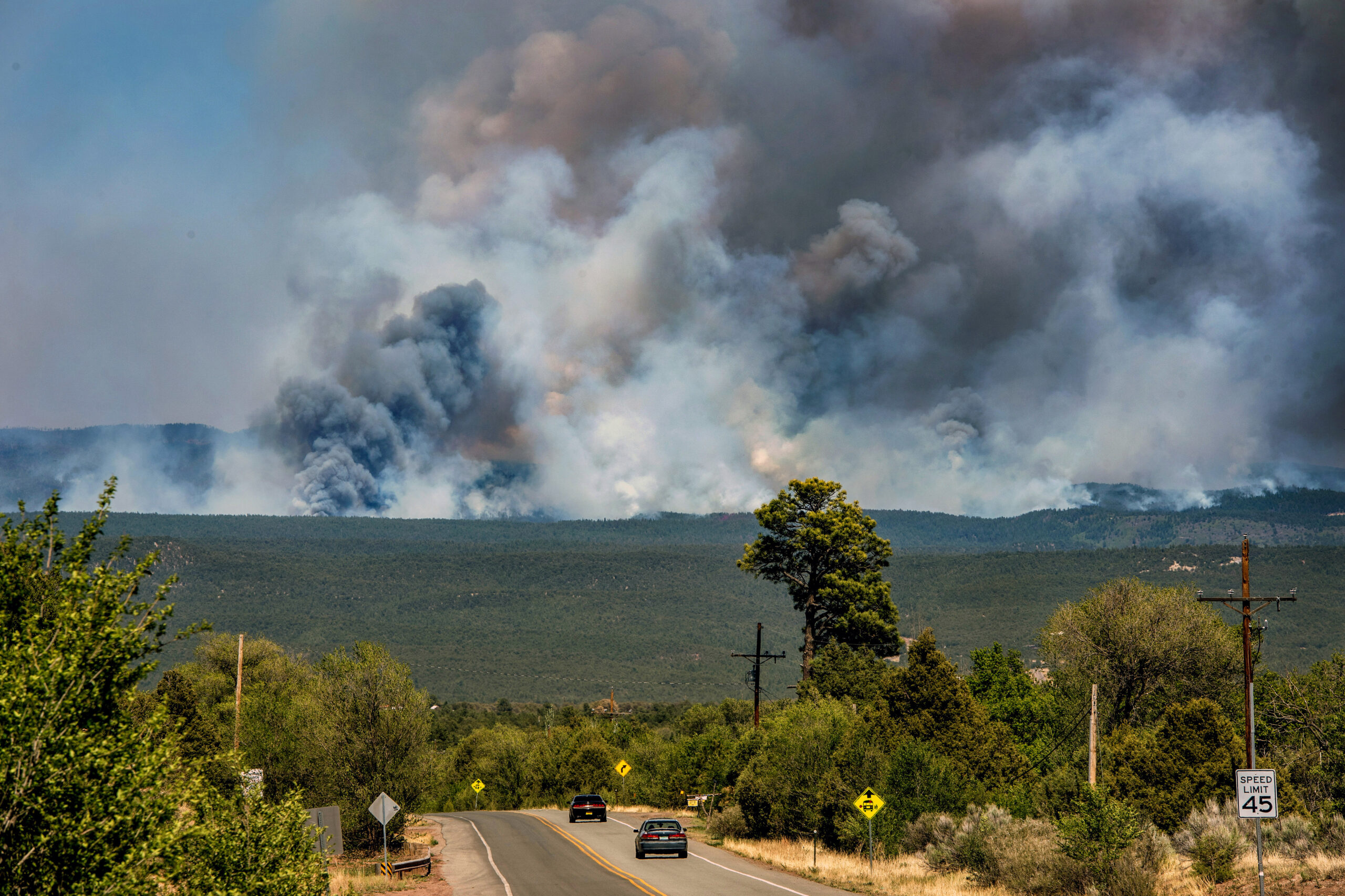 ALBUQUERQUE, NM (AP) — Manuel and Marcy Silva combed through the charred rubble that was once their home, looking for any salvageable bits from the largest wildfire in New Mexico history.

Manuel found two of his high school wrestling medals. Gone are the bedroom furniture Marcy’s grandfather had built as a gift, her wedding dress, and their children’s toys.

The family was just one payment away from owning their single-width mobile home, and like many other northern New Mexico residents whose homes were in the path of the flames, the Silvas were uninsured.

After scorching more than 530 square miles (1,373 square kilometers) of the Rocky Mountain foothills, the government-ignited wildfire is helping bring to light what New Mexico officials are calling a crisis — where the coverage of insurance for everything from homes to workers’ compensation comes at premiums that often make it unaffordable for many in the poverty-stricken state.

New Mexico officials are banking on relocating a California insurer to the state and selling policies in low-income and underserved areas. But the multimillion-dollar merger involving California Insurance Co. has been clouded by pay-for-play allegations and remains stranded in court.

A California judge on Thursday did not accept New Mexico’s request to intervene in the case, but cleared the way for the state to weigh in on a proposed plan to resolve ongoing conservatorship proceedings.

New Mexico attorneys argued at the hearing that the need for more insurers has only intensified since the lawsuit began more than three years ago. They pointed out that companies are struggling to get adequate workers’ compensation coverage.

New Mexico Attorney General Hector Balderas told The Associated Press he’s worried families won’t be able to insure their homes because the risk of wildfire and flooding after a fire intensifies in the context of climate change.

“I’m very concerned that these natural disasters are either going to increase premiums or we’re in a deeper crisis like Florida, where insurers don’t want to come to New Mexico because it’s a very market. hard to insure,” he said.

Wildfires have burned about 11,000 square miles (28,490 square kilometers) across the United States so far this year, slightly exceeding the 10-year average. The season started early in New Mexico when the US Forest Service failed to account for ongoing drought and measures to reduce fire danger were blown out of control by high winds.

The federal government has agreed to funnel $2.5 billion in stimulus money to New Mexico in what members of the state’s congressional delegation described as a ‘down payment’ on what would be a recovery of several decades.

While relief money was celebrated by officials in New Mexico, residents of remote villages scattered in the mountains say they have struggled to file claims with federal emergency managers and that there is no There is no system to quickly get families the help they need.

Mike Maes has lined his house with sandbags and a ladder sits nearby so he and his family can escape to the roof in the event of further flooding after a fire.

“I’m not the type of person to go begging for help or crying for this, that and the other but I’m tired,” he said, lamenting being forced to take time off. from her barbershop business to clean pick up debris and a truck in water to flush toilets and take showers now that the well on her property has been destroyed.

He tried to get insurance years ago, but it would have cost more than he could have insured his property for.

The Silvas said the cost of insuring a single-width mobile home made in the 1970s was insurmountable. And the house used a wood stove for heating _ like many rural houses in New Mexico.

Marcy Silva works in information technology in New Mexico Highlands and Manuel is employed by the San Miguel County Department of Public Works. They would have opted for insurance if it was affordable.

For now, they and their two young children are living with Manuel’s parents. They hope to buy another mobile home, but have acknowledged that the historic rate of inflation is not helping and that there is still work to be done to restore their property.

“The best way I can explain it is that it’s been like an endless nightmare that just seems to get worse and worse,” Manuel said.

Consumer Watchdog, a progressive advocacy group based in Los Angeles, said New Mexico regulators should be careful before allowing CIC to operate in the state. The group sued California regulators in 2020 over emails and other communications after reports surfaced that California Insurance Commissioner Ricardo Lara had accepted political donations from insurers, although he promised during his 2018 campaign not to.

At the time, Lara apologized for accepting political contributions from people associated with Applied Underwriters – CIC’s parent company – and other insurers. He returned more than $80,000 to insurers and other donors with business before state regulators.

Those associated with Applied Underwriters included lobbyist Eric Serna, who retired in 2006 as New Mexico’s Superintendent of Insurance after state officials suspended him over conflict of interest issues.

Lara came under scrutiny again this year when Consumer Watchdog raised fresh concerns about a series of deals involving insurance industry donations and independent groups working to support her re-election.

Jerry Flanagan, the consumer group’s litigation director, said the wildfire situation homeowners in California and New Mexico are facing is heartbreaking. Statistics compiled by the insurance industry show that about 15% of properties in both states are at risk of wildfire. Only Montana, Idaho and Colorado have higher percentages.

“Unfortunately, what insurance companies expect from politicians is usually bad for consumers,” Flanagan said. “So it’s kind of like stepping out of the frying pan in the fire situation for consumers in New Mexico because you need coverage, but the story with California Insurance Co. is that we can’t trust them.”

The company disputes the allegations, calling them unsubstantiated and saying that all California insurance companies engage in some form of lobbying.

Jeffrey Silver, the company’s general counsel, wrote in an email that CIC has provided coverage throughout California and the number of complaints from policyholders and claimants for years is in single digits compared to tens. thousands of policies issued and to millions of people. covered.

Silver said it was time for California to release its “stranglehold” and pave the way for the company to do business in New Mexico, where he said it would still be subject to regulatory oversight and restrictions. periodic reviews.

Balderas, a Democrat who will complete his last term at the end of the year, said what appeals to him is that CIC would move its leadership and capital to New Mexico once the conservatorship is resolved and be subject to state regulations and taxation.

“I think you can hold a company more accountable if it’s headquartered and provides services in the state,” he said.

Lawyers are hoping for a resolution next year, but that leaves people like Maes in a difficult bind.

Describing life without basic public services and the potential for devastation that comes with every rainstorm, Maes took a long breather, trying not to choke. He said he and his neighbors were in hiding and forgotten and coping with all the devastation had been difficult.

“It’s just an ongoing thing over and over again,” he said. “I don’t see the light at the end of the tunnel, but there is hope.”

Photo: The Calf Canyon/Hermit Peak Fire burns in the mountains near Pecos, NM, Thursday, May 25, 2022. After scorching more than 530 square miles of the foothills of the Rocky Mountains, the government-ignited wildfire has helped shed some light on what officials in New Mexico are calling a crisis — where insurance coverage for everything from homes to workers’ compensation comes with premiums that often make it unaffordable for many people in the stricken state. poverty. (Eddie Moore/The Albuquerque Journal via AP, File)