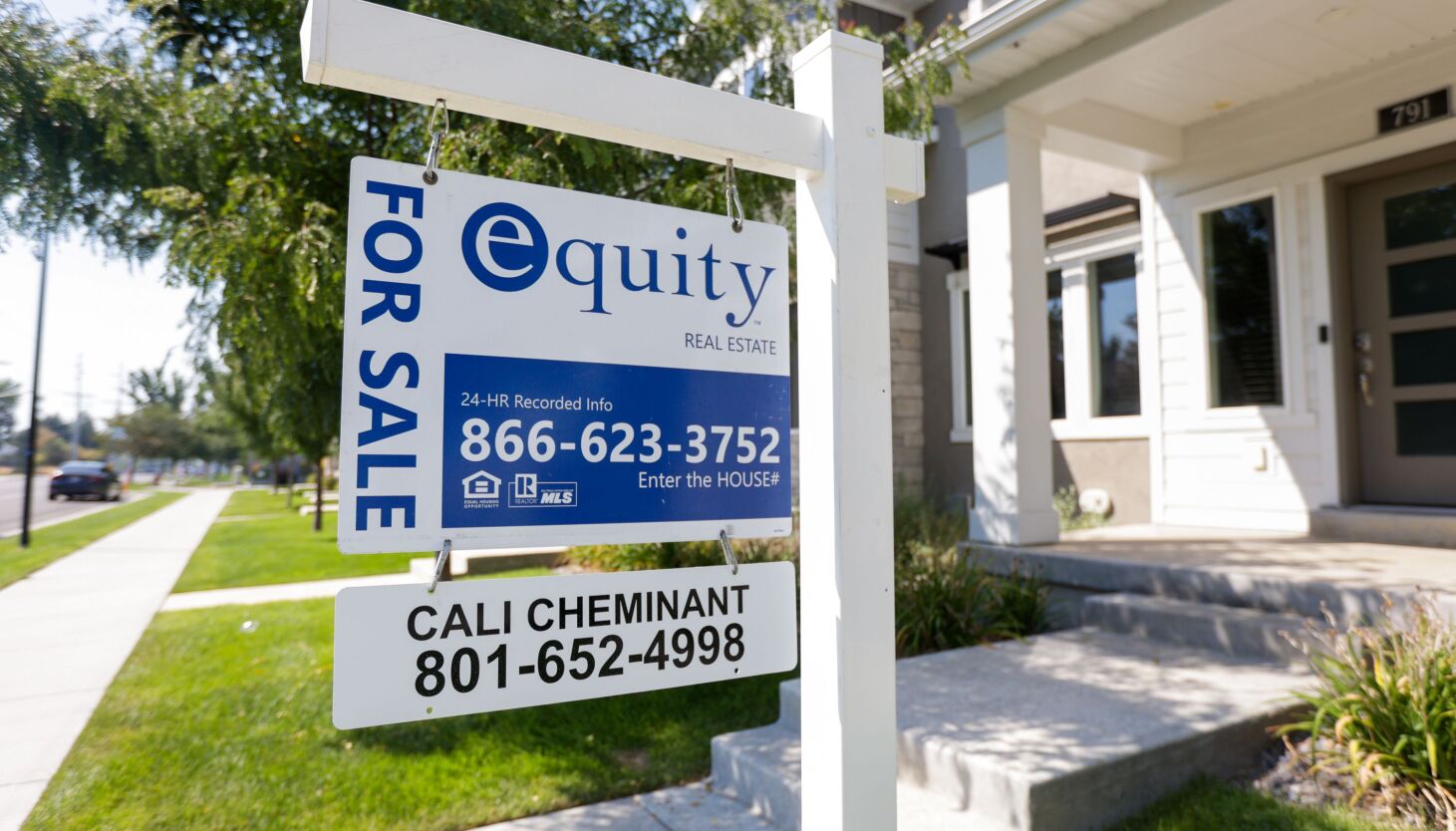 The housing market slump continues. What does this mean for house prices?

As the The Federal Reserve continues to wage war on record inflation rates, it seems higher interest rates are likely to stay for at least next year or even longer – which means the crisis in the US housing market isn’t going anywhere anytime soon.

The impact of rising mortgage rates beyond 5% – and recently even above 6% – was fast and furious. And we’re probably only seeing the beginning of its impact on house prices, although the extent of that impact depends on the regional market.

That’s what Rick Palacios Jr., director of research and managing director of John Burns Real Estate Consulting, told Lance Lambert of Fortune magazine on Friday during a live Chat Spaces Twitter focused on the state of the US housing market these days.

Where are house prices falling?

Palacios recently wrote a commentary article for Fortune, also published on Friday, which stated a “a quick escape” from the current real estate crisis is “unlikely” while noting that 98 major regional markets across the country are already seeing lower home prices, according to preliminary estimates from the Burns Home Value Index through August 2022.

“There are markets where house prices are already falling,” Palacios said, noting that while year-over-year house price growth is still positive, one must look to monthly data for achieve “the deceleration” that is happening now.

The west coast is dotted with red, according to this analysis. San Jose and San Francisco in California, both with a change in house prices of -8.2% since their peak. Seattle, down 7.8%. Reno, Nevada, down 5.3%. Phoenix, Arizona, down 5%.

“Our view and outlook is for this to continue for the foreseeable future,” Palacios said. “The wording the Fed has been using for several months now that housing needs a ‘reset’ is kind of a euphemism for ‘home prices need to come down.’ And that’s exactly what’s happening. right now. ”

Inventory is still relatively low. So why are the prices falling?

Historically, when a real estate market “bounces back”, it usually takes time for house prices to actually fall, Lambert noted. “So why are we already starting to see this in two-thirds of the markets across the country?” He asked.

Palacios said the key here is that across the country, affordability “is at or near its worst.” And when mortgage rates skyrocketed from less than 3% at the end of 2020 to “flirting with 6%,” it simply stopped many Americans from qualifying for a mortgage “because affordability is getting so bad.”

Another key to that conversation, Palacios said, is that while inventories are still relatively low, high mortgage rates have also had a dramatic impact on demand. Not only did the higher mortgage rates cost potential buyers dearly, but they also “locked in” homeowners who bought or refinanced during this “one-in-a-generation financing window.”

” Consider that 85% of outstanding mortgages are locked in at rates below 5%, with 24% sitting at levels below 3%. Good luck persuading someone to walk away from their fixed rate mortgage below 3% or even 4% when inflation is at a 40 year high and the cost of everything is extremely volatile,” wrote Palaces.

He also noted that 64% of existing homeowners would not buy again if the mortgage rate rose above 5%, citing a recent survey by the Institute for New Home Trends. This percentage rises to 85% if the rates exceed 6%. With existing homeowners making up 51% of all home purchases and an overwhelming majority in need of a mortgage, according to the National Association of Realtors, “any impediment to their home buying activity weighs heavily on total real estate transactions,” Palacios wrote.

Based on these figures, Palacios estimates that 33% of real estate transactions “could quickly disappear in the short term. At mortgage rates over 6%, 43% of home purchases could disappear,” he wrote. “These percentages are alarming and likely reflect the current abysmal affordability backdrop, which remains at an all-time worst.”

So Palacios predicts “you’ll see – and we’re seeing it right now – house prices fall, even if supply levels don’t rise. And I think that’s a pretty interesting thing that’s now starting to surprise a lot of people. of people.

So what awaits us? It depends who you ask. Even though Goldman Sachs predicts the market will deteriorate in 2023, the banking giant still predicts U.S. home prices to edge up 1.8% in 2023. But Palacios and his company predict that U.S. home prices US will see its first year-over-year decline in 2023, Fortune reported. The same goes for companies such as Zelman & Associates, run by Ivy Zelman – an analyst who called the housing market peak of 2005 and the subsequent bubble burst.

Zelman’s model predicts that home prices in the United States will not only fall in 2023 – by 4% – but also in 2024 – by another 5%. But again, it will depend on the regional market, she said recently on the Macro Hive Conversations Podcast.

What does this mean for Utah, the West?

The short answer? It depends on the market. Look at Phoenix, for example – what Palacios called “the poster child” for the pandemic housing boom effect. The Metro saw an explosion of buyers, investors and construction starting in mid-2020 until rising mortgage rates dampened the party.

This market — along with other frenetic “bubbly” pandemic markets in the West like Boise, Idaho — were the first to see a dramatic decline in housing market activity and an early drop in prices. In Phoenix, new construction home prices are already down 3.5% year over year, Palacios said, which Lambert says wipes out all price gains dating back to last summer. .

Last month, Boise led the nation with the largest share of sellers cutting prices, with nearly 70% of homes for sale seeing their prices drop in July. Denver is next with 58%. Salt Lake City ranked No. 3, with 56.4%.

So what about Utah – a rapidly growing state that was already facing a housing shortage before the pandemic hit, but also has one of the strongest job economies in the country .

Home prices first began falling in June, which the Salt Lake Chamber welcomed as a sign that home prices in the state were finally beginning to “stabilize” after two years of madness. Dejan Eskic, a senior fellow at the University of Utah’s Kem C. Gardner Institute and one of Utah’s leading housing experts, said at the time that it was actually good news. in a housing market that had been beating home buyers for more than two years.

But in another interview with the Deseret News on Friday, Eskic wasn’t so optimistic about the state of play.

Even though Utah still faces a stubborn housing shortage, even though inventory is rising, and even though many Utahans would like to buy a home, today’s higher mortgage rates have had a detrimental impact on request.

“We have definitely slowed down. Our prices are starting to drop because interest rates are so volatile,” Eskic said.

After listening to the Fed’s last meeting, Eskic said he was “probably not that optimistic” because “it’s like they’re rushing for housing now.” As rates continue to hover around 6%, that’s excluding dramatic numbers of Utahns and squeezing homebuilders.

Since May, when Utah home prices peaked, Eskic said home prices were down about 6% in August, “but we’re still, you know, up 10% from a year to year”.

“So 80% of our mortgages in Utah are below 4%,” Eskic said. This will have big implications for activity in Utah’s housing market as long as rates remain above 4%. Especially given forecasts that indicate mortgage lending isn’t expected to decline for at least the next two years.

So what does this mean for Utah’s housing market overall?

“Affordability is always an issue,” he said. “The only reason house prices go down is because of interest rates.”

While it is easier from a competition perspective to bid on a home compared to the wild markets of 2020, 2021 and early 2022, high prices will still prevent many Utahns from being able to buy a home. and volatile mortgage rates will turn away even those who might be able to afford it.

As prices start to come down, Eskic said, “I still don’t think it’s going to be enough to necessarily bring some kind of balance to affordability.”

Live Highlights Coverage of the 2022 Emmys, Winners of the 74th Annual Awards