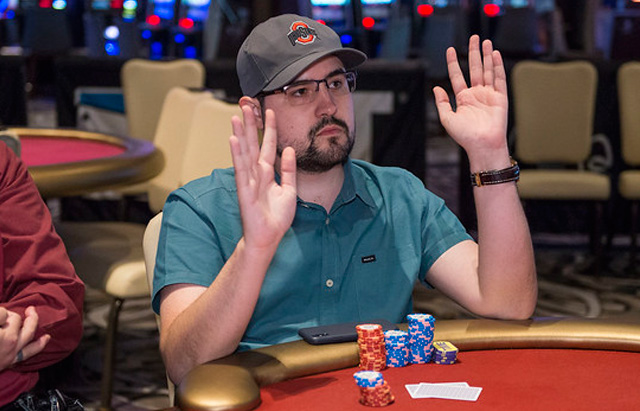 After numerous delays due to the COVID-19 pandemic, 31 years old Dennis blieden, who won the 2018 World Poker Tour (WPT) LA Poker Classic for $ 1 million, was sentenced to 6.5 years in federal prison this week after embezzling millions (originally reported as $ 22 million by the authorities) of a Los Angeles-based digital company. StyleHaul Inc.

In a 15 page letter to Honorable Judge AndrÃ© Birotte, Jr. from the pre-sentencing California Central District Court, Blieden laid out his side of the story, citing extreme gambling addiction and a desire to impress the poker elite as contributing factors to his actions.

In 2019, as part of a plea deal, Blieden pleaded guilty to wire fraud and aggravated identity theft to embezzlement of $ 2.7 million, far less than the original charge, from 2015 to 2019 as Controller and Vice President of Accounting and Finance for StyleHaul Inc. He did so by transferring the company’s money to his personal bank account, which he would then use to gamble and buy crypto -change.

Blieden’s sentence is a little less than that sought in a Government Sentencing Memorandum filed on May 26 where prosecutors pleaded for “102 months [8.5 years], a three-year supervised release and the imposition of an order on the defendant to pay $ 22,669,979.07 in restitution. “

While he has been given a little less time, Blieden will have to pay compensation.

Blieden tells his side of the story

Represented by lawyers Gary Jay Kaufman and Noam Reiffman of The Kaufman Legal Group, Blieden submitted a 15-page handwritten letter “with the intention of explaining to you who I was, who I am and who I am capable of being.” I also want, to the best of my ability, to explain what led to the events of the crime for which I am being prosecuted. “

In the letter, Blieden begins by recounting the story of his upbringing in which he claims to have been introduced to the game at only three years old when his father taught him to count using the game of Blackjack as a means to do so.

At 13, he says he started playing poker for real money against his father and brother. In high school, the “Poker Boom” happened and, like so many others, he fell in love with the game even more.

â€œI was obsessed, idolizing these individuals and declaring that I would one day be like them,â€ he wrote. From there, Blieden said he started hosting poker games and playing online poker, which he attributes to “the first signs I showed of gambling problems.”

Blieden claims he deposited funds using his parents’ credit cards without authorization and then found other ways to do so once they found out and cut him off. According to him, it was in college that “things started to get out of hand.”

It was then that he started using amphetamines and became addicted. After earning a degree in accounting and finance from Ohio State, Blieden moved to Los Angeles and in September 2013 got a job with StyleHaul with an annual salary of around $ 65,000 per year.

â€œI spent most of my paychecks gambling, in addition to taking out high interest payday loans,â€ he wrote. “These loans ended up totaling around $ 50,000, but I knew I couldn’t ask my parents for help anymore.”

Despite the help of a friend of StyleHaul’s, Blieden continued to gamble recklessly, especially after winning “a large amount of money in cryptocurrency.” It was around this time that he entered the high-stakes poker community.

â€œI joined several online groups with some of the best players in the game, and for the first time in my life, I felt I was on the verge of making a childhood dream come trueâ€¦ My desire to belong to these guys would inevitably be one of my biggest vices, because I would go all the way to keep climbing and show them that I belongâ€¦ For me then, to seem to succeed and to have an elite was more meaningful than being either.

“My plans were to take the money, play, pay off my loans, and then return the original amounts I had taken from StyleHaul without ever being detected.”

After losing his savings and a sharp drop in the crypto market, Blieden’s crime at SytleHaul began.

â€œBeing so in debt with no way to pay, I felt I just needed a bigger bankroll and could fix everything,â€ he wrote. “My plans were to take the money, gamble, pay off my loans, and then return the original amounts I took from StyleHaul without ever being detected.”

Obviously, things did not turn out the way he had planned. “The amounts I have stolen have increased exponentially and the speed at which I have been flying has increased.”

By the end of 2017, Blieden had stolen more than $ 2.2 million, and it was a few months later that he claimed his seven-figure WPT victory, which he mentioned in the letter.

â€œThis, in hindsight, had a huge impact on me mentally and was definitely an accelerator of my game. I was now externally validated within the poker community and my peers as a professional player, so I did all I could to keep that reputation alive. My desire to belong was so strong and misguided that I thought playing the games with the biggest buy-in would make me more accepting. I was invited to new private games, where millions of dollars were on the table at once, and my bet size for online gambling grew to at least hundreds of thousands.

As Blieden’s crimes continued, he said at the time he figured if he got caught he would kill himself. In 2018, Blieden said he won over $ 2 million on an online slot machine only to lose it all in under 48 hours, which he said came closest to suicide.

Even after being caught and confessed to his crime in March 2019, Blieden continued to gamble, claiming he owed a loan shark $ 800,000. A month later, his relationship ended when his girlfriend was subpoenaed by the FBI, and a few months later he traveled to Vegas to play the World Series of Poker. His trip did not last long, however, as he was arrested by the FBI in his hotel room.

Blieden said he spent a few months in prison, during which he played poker and tried meth for the first time, before finally being released on bail. He was then under house arrest at his parents’ home in Ohio.

After turning 30 at the end of September 2019, Blieden claims to have gone to his very first Gambler’s Anonymous reunion, which ultimately led to him seeking treatment with Beit T’Shuvah in Los Angeles. He moved to Beit T’Shuvah as a resident in January 2020 and states that since then he has been working on himself, realizing that “if I become a better person, this game won’t even be something I consider” .

Blieden concluded, â€œI am so remorseful and not the same man I am writing this today. I am fully aware that some of the decisions I have made are unforgivable. I take full responsibility for the crimes I have committed. I absolutely do not blame or try to excuse my actions with my addiction, or I do not believe that my addiction alone justifies a downward deviation in my sentenceâ€¦ I fully accept the prison sentence that I am facing. will be inflicted and I promise to make the most of time indoors.

According to another letter filed with the court before sentencing by the Beit T’Shuvah residential treatment facility, Blieden entered The good deed game program on January 6, 2020, and had “completed all levels of inpatient programs and moved to her own residence on March 4, 2021”, but continued to seek treatment with their “intensive outpatient program”.

The establishment, which is based on Judaism, has for more than 30 years offered “alternatives to incarceration, where appropriate, which meet both the protection needs of society and the rehabilitation needs of offenders”.

The letter states: â€œIn January 2020, Mr. Blieden came to us to seek help with problem gambling. After a thorough assessment, it was clear that he was more than qualified for treatment. He was immediately approved for participation in the program and remains in an excellent position. Like most gambling addicts, Mr. Blieden struggled with obsessive thoughts. He had a deep desire for control and a negative relationship with money.

As part of his treatment, the letter reveals that Blieden meets weekly with an addiction counselor, spiritual counselor, therapist and case manager while attending group therapy, attends 12 meetings and regularly tests negative for drugs and alcohol.

“Mr. Blieden started this work and now realizes that recovery is a lifelong process and has hurt many people along the way.”

“I will add that Mr. Blieden is not the same man who entered our program over a year ago”, Janet Markowitz, Senior Alternative Sentencing Partner concluded.

â€œToday Mr. Blieden can honestly admit that the person I first met in Beit T’Shuvah was not much different from the man who played and was in prison before start the recovery process. Today, he can claim that he was selfish, arrogant, selfish and manipulative. He admits it wasn’t just gambling. It was much more. It was a life issue and I was not aware of all of it.

The letter continued: â€œMr. Blieden started this work and now realizes that recovery is a lifelong process and that it has hurt many people along the way. He tells me that he accepts today whatever the court decides.

Despite Rabbi Micha’el Akiba’s request that Blieden â€œbe in a place where he can continue to do the work of honest self-exploration and continued growth,â€ the judge ultimately determined that this place would be a federal prison.